The US Edition of Psychiatric Tales

News. The US edition of Psychiatric Tales is prominantly displayed on page 34 of the new Bloomsbury's Winter catalogue. Here's what the US version of the cover looks like. 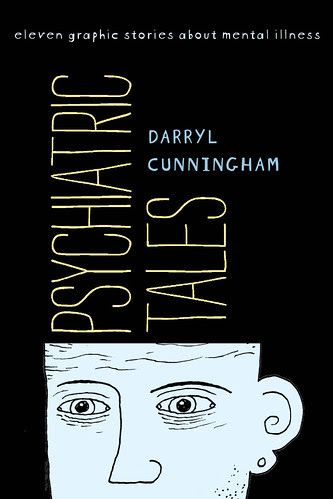 Also, two interviews with me are now online. One is at Avoid The Future, and the other is at Frontier Psychiatrist.
Posted by Darryl Cunningham at 18:33 5 comments:

A Summery of Recent Events

It's been a very good year, so far. Perhaps my best ever. Psychiatric Tales was finally published after years of effort. All hail the internet for getting me to the attention of publishers. It's now out in the UK from the small but perfectly formed UK publishing house, Blank Slate, and will be published by the giganto-sized publishing house, Bloomsbury, in the US early next year.

The book is selling well. It's certainly attracting a lot of attention. I was interviewed for the Big Issue back in Feb (far better than selling the Big Issue). Did a live radio interview on a Scottish arts show. Was invited to take part in the Graphic Medicine conference at the University of London. This latter event looked at the ways that the comic strip format could be used in the study and delivery of health care. Which sounds dry, but it was a very enjoyable event.

Last week I was in Oxford as a guest of Caption (Oxford's annual comic's convention). In three weeks (Monday 23rd of August) I'll be doing a talk at the Laydeez Do Comics meeting at the Rag Factory in Brick Lane, London. The day before that I'll be attending the Comica Comiket Independent Comic Fayre, at the Pump House Gallery, Battersea Park, London.

Oh yes, Psychiatric Tales was also Graphic Novel of the month in the Observer, and this week will be reviewed in the Times Literary Supplement. So it's all rumbling along very well. It's amazing how quickly I've started taking all this for granted.

Also this year I've started putting on the internet chapters of the latest book I've been working on, called: Science Stories. These chapters have whipped up a storm of controversy, as they've tackled such divisive subjects as the MMR Vaccine Scandal, Homeopathy, and NASA's supposed Moon Landing hoax. The comments I've received about these strips have been mostly positive, but I have had my fair share of hate mail. So it goes. Here's a typical example from Anon.

"It is morons like you that cause even lower level idiots to attempt to think with bad information. I am so glad I don't know you or your friends."

This stuff doesn't bother me though. It's to be expected.

On the negative side, despite all this success, I'm still very poor. Although now years in the past, the consequences of being ill and having to leave the nursing course I was doing, are still with me. I ran up huge debts at that time (I was in such despair that I didn't care what happened). So the little money I do make is usually sucked up in charges by the vampire bank, leaving me feebly dry.

This will of course change in time. I presume that Psychiatric Tales and the books I'm working on now will generate money at some point in the future. But I'm not there yet. Which is why donations are still gratefully received. Thanks all.
Posted by Darryl Cunningham at 18:19 6 comments: