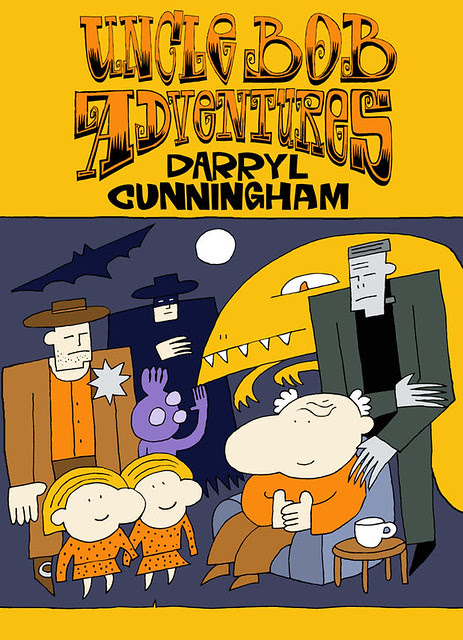 Last week was an extremely busy one. On Monday I was invited to do a talk at York University's sociological society. This went well. A young very receptive audience. I got a day out in York and sold a few books too. Thanks to Will Patterson for the invite.

On Thursday I was the keynote speaker at the Graphic Medicine conference at the Leeds City Art Gallery. I was somewhat nervous about this on the days leading up to it, but of course it was fine. The talk went down well with the crowd, with only one person being negative about it, when I was roundly criticised by a mental health nurse there, for, as he put it, exploiting the mentally ill. He thought the book harked back to the days of old Bedlam when "inmates" were viewed for entertainment by the general public. I easily dealt with his criticisms and was backed by the rest of the audience. The guy was red-faced with anger. He left early to get a train.

That's the first time anyone has been negative in public with me over the book. I was quite surprised. I'm expecting a lot of flack for Science Tales, but I didn't expect any for PT. Go figure.

Then, over the weekend, it was time once more for the annual Thought Bubble comic book convention in Leeds. A huge whirl of an event that gets bigger every year. Both my publishers, Blank Slate books and Myriad Editions had tables. It seemed like nearly everybody I knew connected with the comic book industry was there. I couldn't walk five yards without bumping into someone familiar. Good to see so many friends at once. Well done to the ThoughtBubble organisers for doing such a staggeringly good job. I had an amazing couple of days.

The big event at ThoughtBubble, for me, was the launch of the huge British comics anthology Nelson. A very impressive and handsome looking volume, containing 54 British based cartoonists, including me. Each chapter written by a different cartoonist. My thoughts in advance of seeing a copy were that such an experimental concept, one story written in an exquisite corpse style, couldn't possibly work as a whole and that it would be bitty at best. How wrong I was. The book works as a powerful, heartfelt story about the strange randomness of life, the ebb and flow of friendships, and the importance of identity. No single author could have written the fractured pattern of Nel's life without it seeming contrived, but here the multiple voices and art styles give it a sense of reality, and of a life actually lived, as if Nel was a real person who could actually step out of the pages at the end of the book and greet you in person. No bigger compliment can be given to a work of fiction than that.
Posted by Darryl Cunningham at 18:25 1 comment:

A couple of panels from my chapter of the huge British comics anthology known as Nelson..

Posted by Darryl Cunningham at 12:53 2 comments:

A video from last year’s Drawing Parade, recorded at the November 2010 Comica Comiket. After the excellent Roger Langridge, you'll see me talking about my comic strip work and doing a bit of drawing.

An exended version of that Uncle Bob and Death drawing. 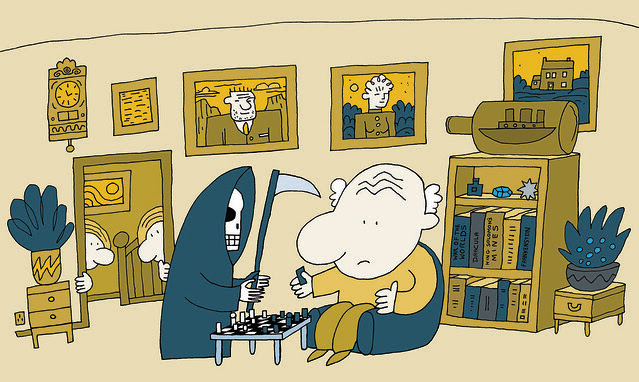 Posted by Darryl Cunningham at 18:43 4 comments:

I've a chapter in this book.

Nelson is a 250-page collaboration between 54 of the UK’s most exciting comic creators. It is an unprecedented experiment to create one complete story – a collective graphic novel.

London, 1968. A daughter is born to Jim and Rita Baker. Her name is Nel. This is her story, told in yearly snapshots. Each chapter records the events of a single day, weaving one continuous ribbon of pictures and text that takes us on a 43- year journey from Nel Baker’s birth to 2011.
Based on an original idea by Rob Davis and co-edited by Davis and Woodrow Phoenix, Nelson celebrates the incredible diversity of talent in British comics today. Creators known for their editorial and national newspaper strips unite with those from humour comics such as the Beano, The Dandy, and MAD Magazine joining a wealth of talent from children’s books, indie publishing and webcomics, with the science fiction and superhero worlds of 2000AD, Marvel, DC, and Dark Horse.

Part exquisite corpse and part relay race, Nelson spans decades of British history and a myriad of stylistic approaches in telling the story of one woman’s life by 54 creators, in 54 episodes, detailing 54 days. The result is a surprising and compellingly readable book that is sad, funny, moving, poignant, ridiculous, heartfelt, and real. This is a story like none you have seen before.

Now available to buy.
Posted by Darryl Cunningham at 17:03 4 comments: